Develop Gongin into a global history & culture sity and a culture capital for central Korea.

On September 9, Governor Yang Seung-jo visited Gongju,
shared the vision and issues for the 2nd year of the 7th directly elected local government,
listened to pressing issues selected by citizens,
and signed an MoU on the enhancement of tangible
/ intangible historical and cultural tourism.

Governor Yang Seung-jo pledged to concentrate resources on develop Gongju-si into ‘a global historical and cultural city and the cultural capital for central Korea.’ On his official visit to Gongju-si on September 9 marking the second year of the province’s 7th directly elected local government, governor Yang signed an MoU with mayor Kim Jeong-seop on the implementation of a plan toward the goal. As his first stop on that day, the governor visited the Tancheon-myeon agricultural water development site and checked the plans to improve the farming environment in the area, including ways to secure water resources.
He then moved on to ‘Art Center Goma in Gongju’ where he shared with citizens the provincial government’s achievements during the past year and introduced the local government’s visions and policy directions before listening to pressing issues selected by citizens, including: (1) revitalization of KTX Gongju Station, (2) Prevention of suicides on bridges in Gongju, (3) Integration of Baekje Cultural Festivals, (4) Creation of a woman-friendly city, (5) Implementation of long-stalled urban infrastructure projects, (6) Support of small business owners, and (7) stabilization of school meal services. An active discussion followed. Through the execution of the MOU, the governor and Gongju mayor agreed to cooperate with each other in developing Gongju-si into ‘a global historical and cultural city and the cultural capital for central Korea’ through: (1) installation of National Chungcheong Gugak Center as a subsidiary of the National Gugak Center, (2) revitalization of the Baekje Cultural Festival, (3) promotion of Baekje Culture ‘Starcation’ (star+location), and (4) energization of Chungcheong Gamyeong and Gongjumok as part of the province’s efforts to expand its tangible and intangible historical and cultural tourism resources.
“Gongju-si is significantly superior to other cities in terms of historical traditions and heritage,” said governor Yang. “Following the Gongsanseong Fortress and the Royal Tombs in Songsan-ri, Magoksa Temple has been inscribed on the World Heritage List, reaffirming the status of Gongju-si as a global cultural heritage city.”
“The provincial government will further enhance the historical identity of Gongju-si as a former provincial capital through the restoration of Gongju Gamyeong and Gongjumok while striving to revitalize the old town area,” the governor said. “Every possible effort will be made to develop Gongju into a global historical and cultural city and the cultural capital for central Korea.” 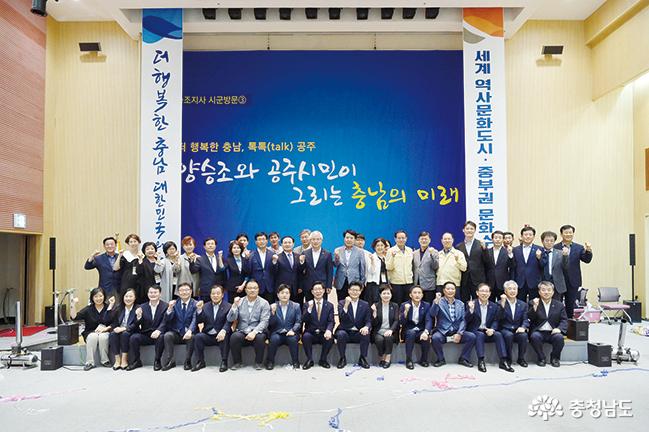