Seek Confucian values that will enrich the future of humanity.

Chungnam-do has held the 3rd International Chungcheong Confucianism Forum as an opportunity to explore the values and roles of the Confucian culture in the modern world of globalization and multiculturalization. On September 18, Chungnam Provincial Office held the forum under the theme of ‘Chungcheong Confucianism in Communication with Humanity - Cultural Diversity and Confucian Culture’ at the Sejong Convention Center. The forum was attended by more than 400 people including governor Yang Seung-jo, Park Byung-hee, director of Chungnam Institute of History and Culture, domestic and foreign experts in Confucianism, Confucian scholars and citizens of the province. Starting with the keynote speech the forum moved on to roundtable talks, an agreement signing ceremony, presentations and a Q/A session.
In the keynote speech, Governor Yang said, “The International Chungcheong Confucianism Forum is aimed at sharing the value and significance of the East Asian Confucian civilization and seeking win-win development among Confucian culture countries in the pan-Yellow Sea region,” adding, “The central government is actively implementing relevant development projects as well as the construction of Chungcheong Confucian Culture Center to share the Chungcheong Confucian cultural heritage with the public across the country."
Subsequent roundtable talks between the governor and Kung Tsui-chang, the 79th-generation descendant of Confucius serving as Dacheng Zhisheng Xianshi Fengsi Guan (Sacrificial Official to Confucius) dealt with the topic of ‘communication, harmony and win-win of the Confucian culture.’ The governor suggested that, based on the homogeneous culture of Confucianism, the central and local governments of the Pan-Yellow Sea countries expand exchanges through Confucian festivals and events and implement mutual visits to their traditional Confucian villages. Kung Tsui-chang responded, “I think that the Chungcheong Confucian Cultural Center can play a significant role in increasing exchanges and cooperation across the Confucian cultural sphere in the pan-Yellow Sea region,” adding, “I hope that this meeting will lay the groundwork for active Confucian cultural exchanges based on communication and mutual understanding.”
The presentations by Confucian experts began with the speech of Dr. Patrick Mendis, a UNESCO member of the US Department of State and a Harvard researcher on the topic of ‘Confucian Values in the American multicultural society.’
He talked about the role of Confucianism in the founding of the United States and the establishment of democracy in the country along with the value of Confucian culture in American society today. Lee Ki-dong, an honorary professor at Sungkyunkwan University, pointed out the spiritual crisis faced by the Korean society thriving in material terms under the topic of 'the value of the Korean Confucian culture in the history of civilization,’ and asserted that Confucian studies should be revived in a creative way.
Prof. Zhai Kuifeng from the Advanced Institute of Confucian Studies, Shandong University talked about the confrontation and co-existence of Confucianism in modern China with Buddhism and Christianity in terms of the characteristics expressed in the school songs and mottos of top 3 universities in southern China.
Lastly, Lee Sang-hae, chair professor of Kookmin University elaborated on the backgrounds, processes, and values of the Korean Seowon being inscribed on the UNESCO World Heritage List before stressing the need to systematically maintain and manage the heritage for the next generation.
Chungnam plans to foster the Chungcheong Confucian Cultural Center slated to open in 2021 as Korea's representative Confucian institute, and complete the comprehensive tourism development project for the Chungcheong Confucian Cultural Sphere under way as scheduled in order to boost the exchange of the Confucian culture in the pan-Yellow Sea region. 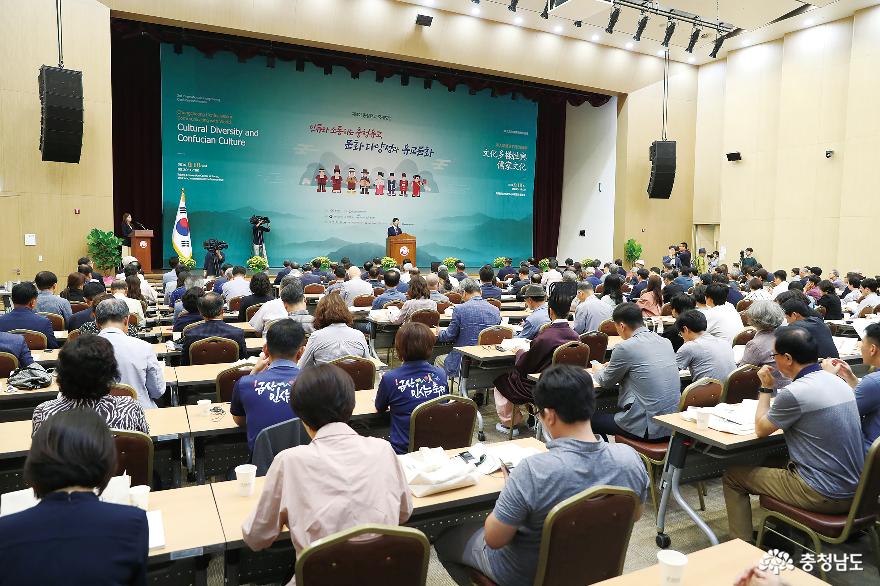