Things to see and eat during winter in Chungnam

Top 3 seafoods in the west coast area of Chungnam 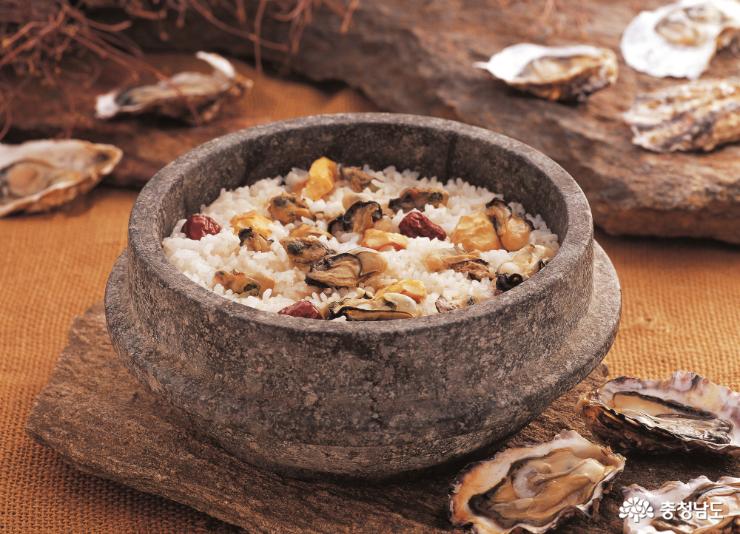 Food is something that cannot be left out of a fun trip. In cold weather like that which we face these days, the seafood of the west coast region is in season. We present to you wintertime tourist attraction and the top 3 delicacies of Chungcheongnam-do, the Cheonbuk oysters of Boryeong, the Namdanghang Port cockles of Hongseong and the Cubed Snailfish Soup of Boryeong, Seocheon and Taean (Muljambaengi Soup and Multeombeongi Soup).

Clean Boryeong with white snowy paths and whiter oyster dishes
See: “Snow flower path of Oseosan Mountain”
In Boryeong, there are 3 natural scenes that can be witnessed only in a snowy winter season, which makes the city a great location for a weekend trip. The aforementioned scenic locations are the “snow path more beautiful than a cherry blossom road” of Oseosan Mountain known as the lighthouse of the West Sea, “Boryeong Dam resembling Baekdusan’s Cheonji” viewed from Yanggaksan Mountain, and “Muchangpo Sunset” between Seokdaedo Island and Dakbyeoseul Island from Muchangpo Beach.

Oseosan’s snow path more beautiful than a cherry blossom road extends 1km over a ridge from the peak of the mountain, and snowier paths have been formed this year than in previous years due to continued cold weather and heavy snow, making it a popular destination for winter hikers. Boryeong also has other wonderful tourist attractions such as Boryeong Dam that resembles Cheonji of Baekdusan, and Muchangpo Beach famous for the magical sea path, so please check them out as well!

Eat: “Cheonbuk Oysters”
Low in fat and rich in minerals, the best Cheonbuk oysters are those caught between November and February. The oyster complex in Jangeun-ri has been a famous area for grilled oysters since long ago, attracting 200,000 visitors every year and continuing to solidifying its reputation as one of the best tourist spots of wintertime, and, in addition to grilled oysters, you may taste a variety of oyster dishes including oyster rice, oyster kalguksu, braised oysters and seasoned oysters. It is one of the eight delicacies of Boryeong and, also called the “milk of the sea”, oysters are good for diets because they possess a low content of calorie and fat and also contain an abundance of calcium.

Iron and copper are also contained in oysters, which makes them good against anemia, and the presence of a large amount of taurine is effective for lowering cholesterol and blood pressure. In particular, the zinc contained in oysters vitalizes growth hormones while glycogen is an energy source that does not place any burden on the pancreas, resulting in great enhancement of stamina. In December, Cheonbuk Oyster Festival is held to invite tourists to a feast of oysters.

Juk-do with clean nature and Hongseong-gun enjoyed with fresh cockles
See: “Juk-do”
An island that became accessible by ferries leaving from Namdanghang Port, Juk-do is a beautiful place with clean nature and hidden landscapes that welcomes over 700 visitors on the weekends, it’s that popular. Near Juk-do, a number of traces of historical figures can be found as Hongseong was a sacred land for anti-Japanese movement. Also, do not miss out on a chance for exciting memories with your child by visiting Sokdong Observatory, the Seafood Well-being Experience Center and the Bird Exploration & Science Hall located near the port.

Eat: “Cockles of Namdanghang Port”
A variety of fresh seafood awaits visitors near Namdanghang Port. During the winter, cockles with their gooey meat and unique sweetness entice the taste buds of epicures. Named after their resemblance to the beak of a bird, cockles (saejogae) contain low cholesterol and fat, which makes them effective in diets, and an abundance of nutrients such as protein, iron and taurine that help improve the level of immunity of your body especially in the cold weather that we experience these days. Namdanghang Cockle Festival is held near the port in Seobu-myeon, Hongseong-gun from January to February every year, and features a variety of programs in which tourists may participate.

Seocheon-gun featuring an atmospheric mud flat pottery experience and a refreshing bowl of cubed snailfish soup
See: “Wolhaseong Fishing Experience Village of Seocheon”
“Wolhaseong” refers to a location where moonlight shines on a tranquil water, and is an area with a myth that tells how a wise man came down from the heavens as he was captivated by the coastline of a village resembling a crescent moon and the shadow of the moon reflecting on the sea. At Wolhaseong Fishing Experience Village, you may enjoy a special experience of creating pottery by adding mud. The stroll path with a great view by the coast is a bonus. How about spending a pleasant time while making your own special pottery and walking along a road by the winter beach?

Eat: “Cubed Snailfish Soup of Seocheon”
Known as a dish to cure a hangover, cubed snailfish soup produces a clean taste by only adding sour kimchi without other sauces or seasonings. Cubed snailfish inhabits the temperate climate waters in the northwest Pacific Ocean and is caught throughout the country’s coasts from the end of November to March of the following year. According to “Jasaneobo” of Jeong Yak-jeon, which is an encyclopedia on fish written in the 19th century, cubed snailfish has “extremely tender meat and soft bones. Its taste is bland and it often cures hangovers”. It does not have a fishy smell, and it is widely used as an ingredient in soups for hangover cures. Boiling cubed snailfish with daikon, fresh vegetables and red pepper powder, the soup boasts a clean, spicy taste, making it an ideal choice as not only as a side dish with rice but also as something to eat with drinks and also as a way to ease your stomach after heavy drinking.