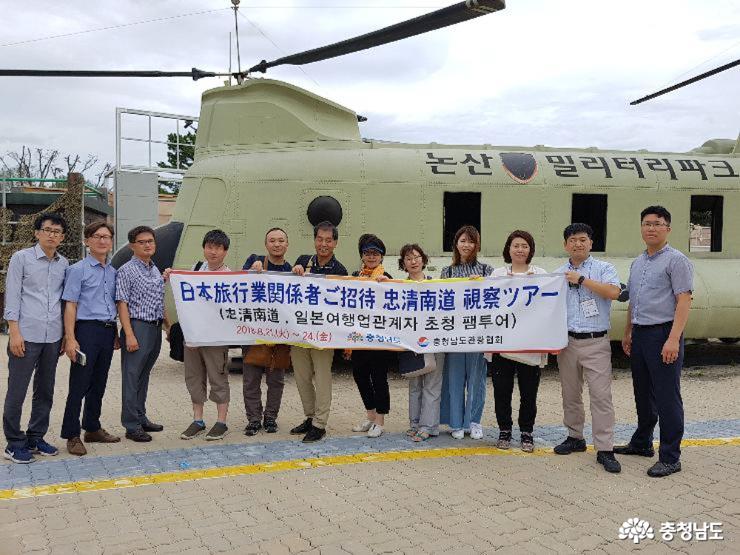 The city of Nonsan speeds up its strategic PR marketing to attract foreign tourists.

On the 23rd, Nonsan invited 8 representatives from Japanese travel agencies and hosted a fam tour during which they visited and experienced various tourist attractions in the city, an event that received positive feedback.

Taking place as a result of the city’s participation in a local tourism information session held in Japan during this past June, the fam tour was comprised of a course with visits to Nonsan’s famous tourism resources including Sunshine Land, Ganggyeong Traditional Salted Fish Market and Ganggyeong Modern History and Culture Street.

The representatives enjoyed first-hand experiences at Sunshine Land, which opened last November, and expressed especially enthusiastic responses at Sunshine Studio, a filming site of a tvN drama called “Mr. Sunshine” that has been extremely popular after it first aired in July. From their reaction, potential for Hallyu craze in the future was confirmed.

They also spent some time enjoying the great flavors of Ganggyeong salted fish that boasts a 200-year tradition at Ganggyeong Traditional Salted Fish Market, showing a great amount of interest in the excellence of our salted seafood culture.

The city plans to develop its own products that combine attractive tour resources unique to Nonsan, which include the nation’s largest military theme park, drama sets, Tapjeongho Lake and Ganggyeong Modern History and Culture Street, and a variety of contents, thus concentrating on attracting both Korean and foreign tourists.