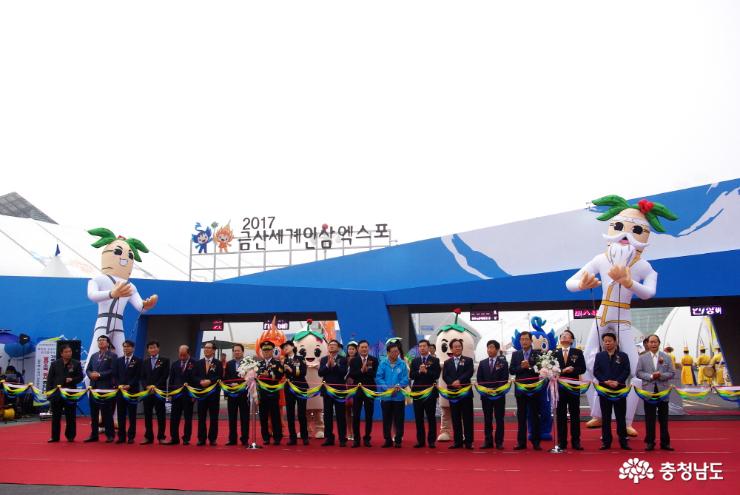 The federation comprises 16 Korean cities and counties including Geumsan-gun as well as 12 cities overseas that cultivate ginseng as their main cash crop. The 28 cities agreed to cooperate on information exchanges for the growth of the ginseng industry. Details of the agreement include ▲ joint construction of ginseng research database, ▲ joint development of ginseng’s effects, ▲ pursuit of intercity exchanges in ginseng technology and talent, ▲ regular international events to be held and ▲ research activities such as product preference surveys and seminars.

At the inaugural meeting, Lee Dong-pil, Chairperson of the World Ginseng Expo Organizing Committee, stated, “As the viewpoint on ginseng varies by country, from medicine to food, for ginseng to obtain consistent trust from customers as a functional health product, the means to install an international standard from processing to distribution are needed…through the establishment of WGCF, collaboration among countries in, for example, ginseng’s effects and administration methods and product standardization will be further solidified.”

Moreover, on the 21st, the province held the “2nd Chungcheongnam-do Local Government Meeting” in the large conference room in Geumsan International Ginseng & Herb Research Institute with Provincial Governor An Heejung, County Governor Park Dong-chul and 13 other mayors and county-governors in attendance. At this meeting, 4 main topics were discussed including ▲ ways to vitalize Chungnam’s resident council, ▲ marine pollution accidents and waste management measures, ▲ pursuit of the legalization of unauthorized cattle sheds, and ▲ ways to improve children’s play culture.

Chungcheongnam-do will collect all of the opinions from this local government meeting and report their progress in the follow-up meeting while the items that must be dealt with on a national scale are arranged to be further discussed in the 2nd cabinet meeting.

At the meeting, Governor An emphasized, “Through trial operation of eup, myeon and dong resident councils, a grassroots democratic implementation model is to be made that expands the scope of decision-making by residents themselves.”

He also added, “For prevention of marine pollution and protection of fishery resources, an increase in the number of water surface cleaners and submarine waste collection and processing ships will be proposed to the central government and, in the meantime, Chungnam will maintain its interests in finding possible solutions.”

Moreover, Governor An stated, “The central government plans to hold the 2nd cabinet meeting sometime in October so a solid autonomous decentralization meeting system must be established in both the central and local governments”, and urged the Chungnam Local Government Meeting to be “a model case for autonomous decentralization among 17 cities and provinces nationwide as well as an exemplary region for the Moon Jae-in regime that has declared a decentralized nation with a federal system.”

Meanwhile, the Chungnam Local Government Meeting, which has agreed to its implementation and operation on July 10th, is the nation’s first implementation model at the local government level from the new administration’s “2nd cabinet meeting” as well as a constant communication channel among the province, cities and gun’s. It specified as major functions, ▲preemptive discussion on federal policies that can affect local regions and pursuit of direction of response and ▲pursuit of common growth direction for the future through sharing of provincial, city and gun’s policies.