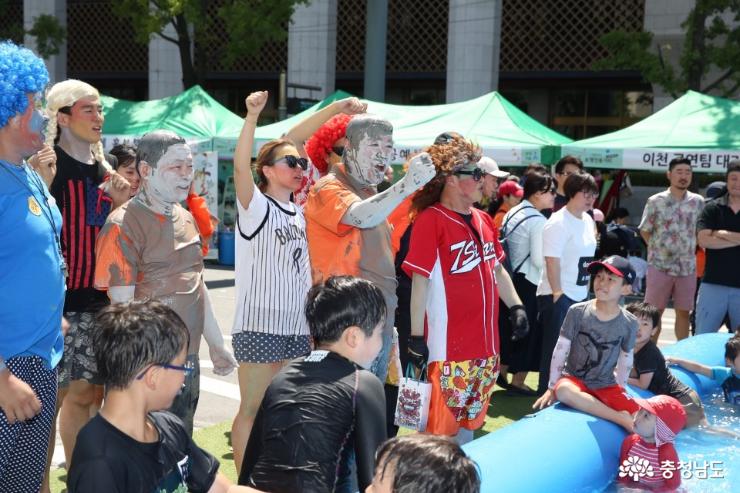 The City of Boryeong recently held various events and a forum in preparation for the Boryeong Mud Festival this coming July. The Boryeong Mud Festival is the most popular festival in Korea, attracting more than three million tourists each year. The ten-day extravaganza of thrills and spills will be held at Daecheon Beach in Boryeong from July 17~26.

The Boryeong Mud Festival provides exciting opportunities to enjoy the well-being lifestyle thanks to the health-giving property of the mud, while Daecheon Beach is the only shell powder beach in Asia. Many tourists come to the festival just to experience the mud and enjoy the beach at the same time.

Above all, visitors can experience the excellent effectiveness of the mud, which is well known to be good for the skin. Notably, this year’s festival will feature various exciting events including a giant mud bath, a mud super slide and a mud prison among others.

The City of Boryeong has carried out relay PR activities nationwide as part of a major campaign to promote the festival. The PR group, composed of 160 people organized into 6 teams, visited the multi-purpose facilities of government offices and the terminals, stations and squares of six cities including Seoul, Busan, Incheon, Gwangju, Daejeon and Chuncheon to hand out PR materials about the festival and pamphlets on travel in Boryeong.

In addition, the PR group wore “mud” T-shirts to attract attention as active marketing. This event was staged to promote not only large-scale events such as the 20th Boryeong Mud Festival and the 12th National Marine Sports Games in August, but to publicize Visit Boryeong Year 2017. The proclamation ceremony was held from 1:30 ~ 3:00 pm at the special stage in Gwanghwamun Square, after various performances of mud-themed song, dance and recreation.

Furthermore, celebrities from Boryeong such as Nam Hee-seok and Ahn So-mi were appointed as honorary ambassadors, and there was a proclamation performance (a mud bucket challenge) as well as various ceremonial performances. Meanwhile, in the street in front of the Sejong Center in Gwanghwamun Square, experience zones and booths featuring a mud slide, a mud bath and air bounce were set up, as well as a colorful mud and VR experience on travel in Boryeong, and mud-based cosmetics products were available for purchase.

Jointly organized by the Ministry of Culture, Sports and Tourism and the Korea Tourism Organization, the 2017 2nd Culture & Tourism Festival Development Council was held at the Hotel Mudrin on May 30~31.

During the conference, the Boryeong Mud Festival was presented as the most outstanding case of festival globalization, the PR methods of each culture and tourism festival were discussed, and in-depth discussions were held on methods of expanding overseas exchanges, based on the export of Boryeong’s expertise to Rotorua in New Zealand, through cooperation between the government, the Korea Tourism Organization, and the local government.

CEO Kim Dong-il stated, "This year's the 20th Boryeong Mud Festival is designed to satisfy all five senses by offering diverse events including a K-POP concert. We aim to establish a solid foothold as the true main festival in Korea. The 110,000 citizens of Boryeong will work together in harmony, and we will do our utmost to make sure this event is not just a festival, but something that unites people from all around the world."