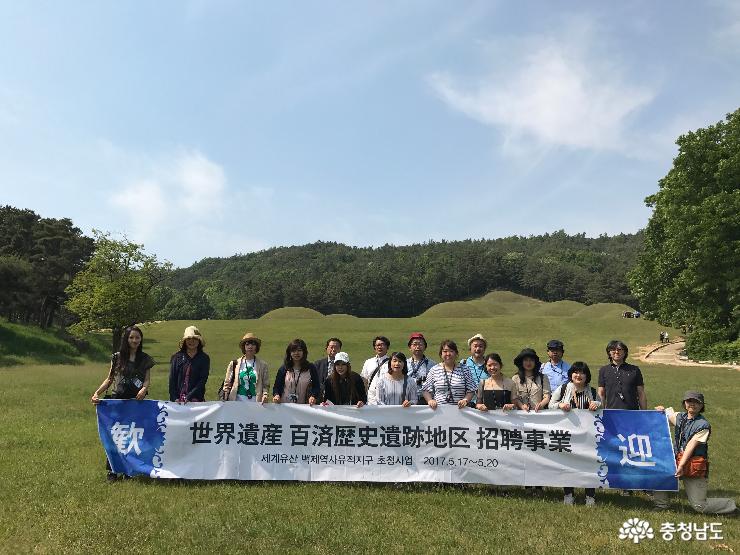 ▲ Participants of the Familiarization Tour

The Cultural Heritage Administration and the Baekje World Heritage Center (Chairman Nam Gung-young) invited twenty travel agencies and media organs from Japan to promote the Baekje Historic Areas, a UNESCO WORLD HERITAGE, on May 17~20 for the second familiarization tour held so far this year.

The tour involved the participation of thirteen travel agencies including Sanjin and Nissan Travel Service, which are based in the Japanese region most closely related to the Baekje Dynasty during the Three Kingdoms Period, as well as JTB, San Travel and Eurasia among others. In addition, reporters from seven major Japanese newspaper companies including Chisa, Chiba and Nakata participated in the tour.

The participants arrived at Incheon International Airport on the 17th, and visited the Songsan-ri Baekje Ancient Tombs, Gongsanseong Fortress and National Gongju Museum on the first day of the tour. This was followed on the second day by a trip to Seokjangni Museum to experience the way of life of the New Stone Age, and a visit to the Buyeo Historic Areas including the Neungsan-ri Ancient Tombs, Naseong Fortress, Gungnamji Pond, and the Jeongnimsa Temple Site. On the morning of the third day the participants took part in a pottery-making experience in Baekjeyo and the Hwangpo Mast experience, and visited the Mireuksa Temple Site (UNESCO World Heritage Site) and the Wanggungni Historic Site in Iksan in the afternoon.

Over a period of four days the participants rediscovered the value of the glorious Baekje culture, and acknowledged that Baekje had actively led exchanges of civilization between ancient East Asian kingdoms such as China and Japan, as well as embracing and further developing urban planning, architectural technology, art and religion from China before passing them on to Japan and East Asian countries.

A Japanese reporter who participated in the event commented, "In recent month’s South Korea’s political situation has been plunged into great chaos, and the domestic and international situation has been unstable due to North Korea’s missile tests, making it very difficult for us to decide whether or not to participate in this invitational familiarization tour. However, after visiting the Baekje Historic Areas and hearing the details, we will do more to promote the historic culture of Korea’s Baekje kingdom in Japan In order to persuade Japanese tourists to visit Korea more often."