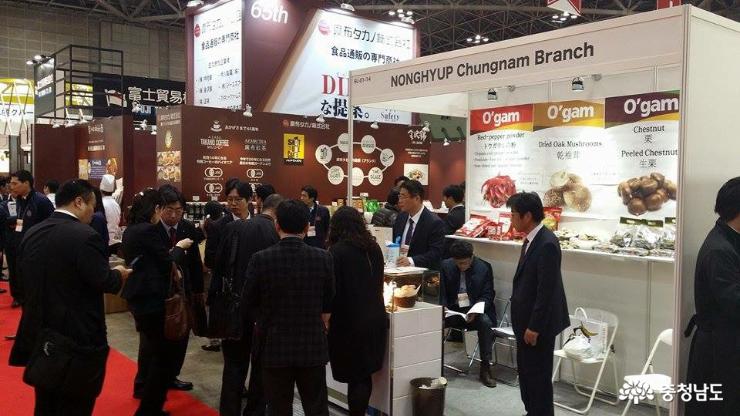 ▲ Chungnam Booth at the Supermarket Expo in Japan.

Due to serious concerns about a drop in the export of agricultural foods to China as a result of the deployment of THAAD in South Korea, Chungcheongnam province is focusing on the implementation of measures aimed at supporting the overseas marketing of local companies that export agricultural foods.

The export volume of agricultural foods from Chungcheongnam province to China amounted to about 65 million dollars last year, which accounts for about 17% of its total export volume.

Although this is about 3 % less than in 2015, China remains a market with a high potential for expanding local exports.

Among these, dairy products such as milk and powdered milk are heavily dependent on export to China, and there are concerns about the damage caused by the THAAD issue increasing in the future.

The ostensible reason for China's rejection of customs clearance of agricultural foods from the
province last year was the failure to pass the local food hygiene standards for red ginseng tea and seasoned laver - including the detection of copper and colon bacillus, and an excessive number of bacteria, etc.

However, as most of the custom clearance rejections occurred after the decision to deploy THAAD was made last July, the main cause has been attributed to the Chinese government’s application of a stricter hygiene standard, as well as to seasonal causes such as high temperature and humidity.

Accordingly, the province is seeking to diversify its export markets to include Southeast Asia by supporting the participation of companies that export agricultural foods in the Hong Kong Fresh
Agricultural Food Expo and the Malaysia Food Expo.

In addition, the project to support the overseas marketing of agricultural foods will be promoted in advance by hosting foreign buyer invitational export meetings on a regular basis.

Moreover, funds of KRW 1.8 billion will be made available at the low interest rate of 1% to enable locally-based companies to upgrade their sanitary facilities and purchase raw materials for export in preparation for the Chinese government’s application of strict hygiene standards.

Also, companies that export agricultural foods to China will be supported with consistent monitoring of cases of customs clearance rejections and delays by the General Administration of Quality Supervision, Inspection and Quarantine in China.

The results of the monitoring will be disclosed to local companies through the Agricultural Commerce & Environment in China Briefing Session.