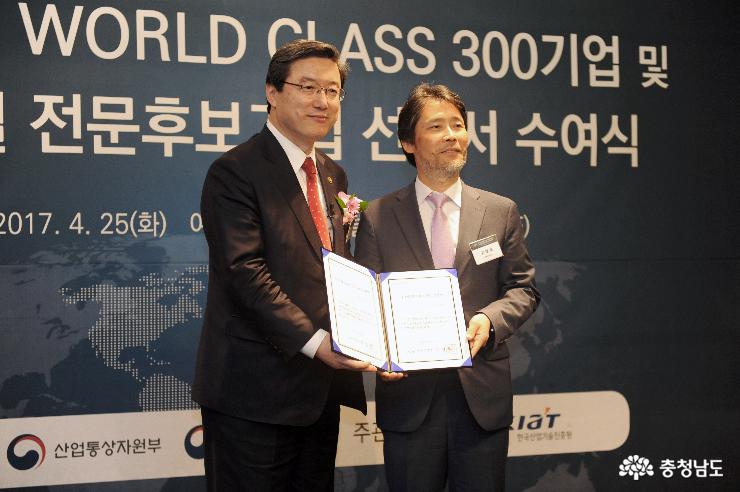 ▲ TSE, selected in the World Class 300 Project, receiving the award.

Four companies based in Chungcheongnam-do have been selected for the 'Korean Hidden Champions Development Project-Global Growth Stage, under the World Class 300 Project hosted by the SMBA (Small & Medium Business Administration) and the Ministry of Trade, Industry & Energy.

The World Class 300 Project aims to develop small and medium-sized companies armed with the determination to grow and the potential to lead the global market as 'Hidden Champions'.

The province visited small and medium-sized companies with growth potential to provide them with close support, including advice on strategies for growth, expert consulting, and development of the corporate environment, to assist their designation as World Class 300 companies.

Since 2011 twelve local companies have been selected as World Class 300 companies.

The basic criteria for small and medium-sized companies to be eligible for designation as a World Class 300 company include posting a sales amount of over KRW 40 billion in 2016 (KRW 10 billion for system SW development & supply business, engineering business and design business) and less than KRW 1 trillion.

The selected companies receive support for the development of outstanding R&D core and application technologies for the next 5 years, overseas marketing to promote their advance into the target market for the next 3~5 years, free participation in Job Expos, and training and consulting for 3~5 years.

Lee Dong-soon, head of business commerce & exchange in the province, remarked, "This project is expected to lead to the discovery of outstanding small and medium-sized companies in the province, with the aim of developing them into global enterprises that will make a significant contribution to activating the local economy and creating good quality jobs."