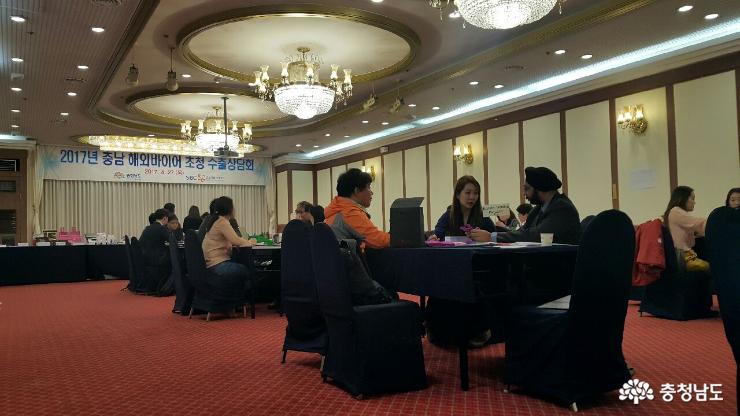 To improve the export environment and diversify the overseas sales channels, which became strained as a result of the recent THAAD deployment issue, Chungcheongnam-do held the Overseas Buyer Invitational Mini Export Conference, receiving 1.568 million dollars of export consultation and winning export contracts worth US$ 121,000 during the event.

The export conference was organized with the focus on supporting and facilitating the recovery of exports in the Chungnam region in the 1st quarter of this year (an increase of 27.4% compared to the same period in the previous year, to 18.1 billion dollars), and continuing into the 2nd quarter.

The conference hosts invited ten major buyer companies from five countries including Kazakhstan, Japan, Myanmar, India and New Zealand, while twenty-two small and medium-sized businesses based in the province also participated in the conference.

Notably, among the companies that participated in the conference were a number of outstanding small and medium-sized businesses within the province that specialize in the manufacture of skincare cosmetics, functional cosmetics and devices, mask packs and health functional foods.

The conference also featured a space for exchanging exports with the aim of showing the excellence of products manufactured by local small and medium-sized companies and boosting exports between the countries and companies concerned.

The first day (27th) of the conference included a 1:1 export consultation between foreign buyers and participating companies from the province, while on the second day foreign buyers had an opportunity to directly visit the sites of the small and medium-sized local businesses.

Most of the buyers participating in this year’s conference made highly favorable comments about the technological excellence and high quality of the products of companies in the Chungnam region, and expressed their intention to promote continuous trade, thus raising expectations for higher exports in the future.