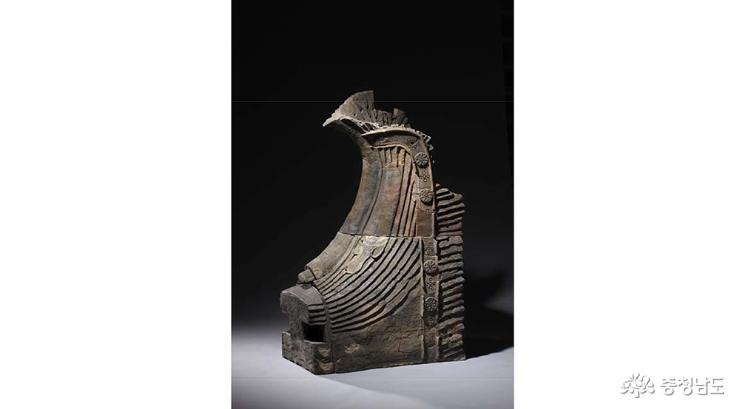 National Buyeo Research Institute of Cultural Heritage Administration(Manager Bae Byeong-seon) restores Baekje Chimi, which was unearthed during excavation investigation on Wangheungsa Temple Site located in Gyuam-myeon, Buyeo-gun, Chungchengnam-do in2013-2014(Chapter 427 of historical landmark) and reveals it to the public for the first time at the National Palace Museum on 3rd of this month.
*Chimi: It is a decorated roof tile which is common in East Asian Traditional Architecture. It plays roles in raising dignity of the building and expelling ghost by roofing the building’s opposite site ends of Yong Ma ru(the ridge of a roof) with it.

Buyeo Wangheungsa Temple Site is a historic relic that National Buyeo Research Institute has been conducting academic excavation investigation 15 times since 2000. In particular, in 2007, it is a temple site which gained great attention because Sarira Reliquary(Chapter 1767 of treasure) was discovered and this is the oldest one ever found in South Korea.
*Sarira Reliquary: It includes Sarigi container for sarira, Sarigam where put Sarigi and all sorts of offerings which are enshrined with Sarigi.

When it is compared with decorated antefix patterns and excavated other artifacts, Chimi which will be revealed this time is estimated to have been made in the founding of the Wangheungsa Temple(Around A.D. 577) and the Chimi is being considered as not only a precious data providing comprehensive information on roof tile production technique, building technique and the style of architecture of Sabi period but also the oldest one among other ancient Chmis so far like Chimi of the ruined temple of Busosan Mountain and Chimi of Mireuksa Temple Site.

Chimi of Wangheungsa Temple Site was decorated splendidly with diamond-shaped lotus, cloud, flowering plant patterns. Over all, it gives a feeling as if a bird flies up into the air with its tail erect, sharply describing the tail section of Chimi upward. In this respect, we could recognize the Baekje’s top-class artisan spirit that elevated the simple roof decoration into a work of art with splendor and dignity.

Also, the fact that Chimi was used in Seungbang building where monks live, unlike the well-publicized case that Chimi was probably used only in the main building or hall of Buddhist temple, is a noteworthy data that can assume that the rank of the monks was high at that time.

The excavated Chimi will be once released to the public and experts who are related at a ‘Foreign Exchange of Baekje , Silla Roof Tile in the 6-7th century’ symposium which is proceeding in an auditorium of National Palace Museum of Korea on Nov. 3 at 1:30 P.M. and it will be entered and displayed at ‘Baekje Historic Areas of World Heritage’ which is special exhibition of National Museum of Korea from Nov. 29th.