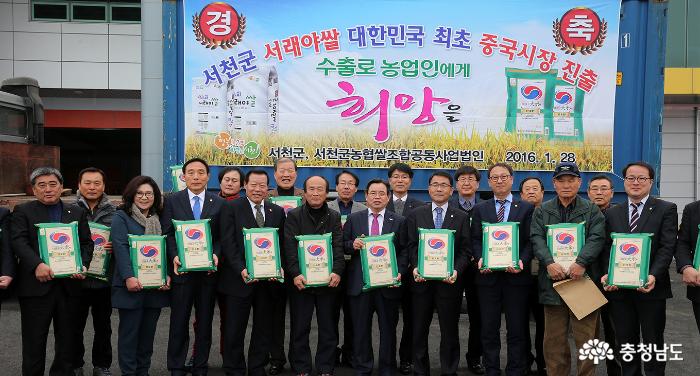 The second shipment (36 tons) of Seoraeya Rice produced in Seocheon-gun was shipped for export to China in February after the first shipment (5 tons) in January.

Seoraeya Rice is exported through KOFCO, the largest state-run food business in China. It started to be sold at 69 Lotte Mart stores in Shanghai in mid-February.

The export of Korean rice has been blocked due to stringent quarantine conditions imposed by the Chinese authorities. The signing of the MOU in October 2015 between the two countries for cooperation in rice-related quarantine inspection opened the way for the export of Seoraeya Rice to China, with Seocheon-gun’s Nonghyup Rice Processing Complex (RPC) passing the on-site inspection by Chinese quarantine officials.

The four-person team consisting of Chinese quarantine officials expressed high level of satisfaction with the Nonghyup RPC, where Seoraeya Rice, which is known for its excellent quality that it is named “Samgwang,” is hygienically processed.

Seoraeya Rice is grown with hairy vetch, which is nature-friendly green manure, instead of chemical fertilizer. The stringent quality criteria based on well-prepared contract cultivation were cited as another advantage of Seoraeya Rice.

The prospect of the continued export of Seoraeya Rice to China looks bright, as the Chinese have a favorable view of Korean rice amid their heightened interest in Korean food in association with hallyu (Korean wave).

Meanwhile, Seoraeya Rice became the first rice brand to receive a Gold Medal in recognition of its good quality at the 2016 Selection and Evaluation of Excellent Brand Rice in Chungcheongnam-do .

Seocheon-gun exported 450 tons of rice to Australia and the EU in 2015. It plans to expand the export amount to a total of 1,000 tons to China this year, with the aim of gaining the upper hand in terms of the country’s market share.