Chungcheongnam-do and Ecuador look for ways of cooperation in agriculture 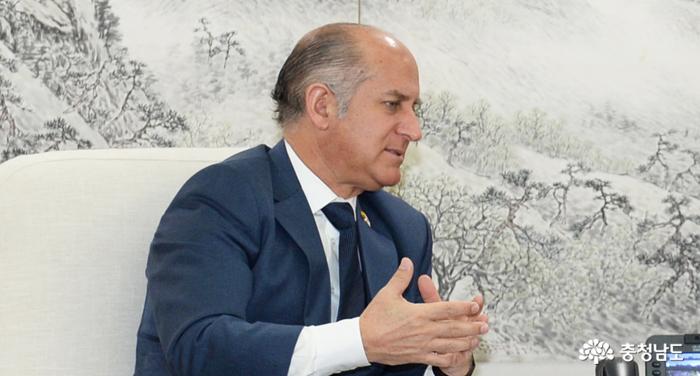 Governor An Heejung met with Ecuadoran Ambassador Oscar Herrera on March 15 at the Chungcheongnam-do Provincial Government Office and discussed ways of mutual cooperation in agriculture between the province and Ecuador.

The Ecuadoran envoy to South Korea explained the reality of rural villages in his home country, which are suffering from poor technology, and asked for mutual cooperation using the province’s advanced agricultural technology.

“I understand that Chungcheongnam-do leads the other provinces in Korea with good agricultural policies and efforts for innovations in the three areas of agriculture, agricultural community, and farmers. Let’s create a business model by having the farmers of the two countries work together for the production of farm products in Ecuador and export them to Korea,” he said.

Governor An listened attentively to the explanation of the Ecuadoran envoy on the status of farming, soil, and climate of his home country and promised to give positive consideration to the exchange of agricultural technology and crop seeds between the two parties.

With regard to the Ecuadoran envoy’s suggestion, Governor An cited the need to check whether it will affect the domestic farmers. “Meanwhile, the two parties may find ways of mutual cooperation by exchanging agricultural technology and crop seeds and providing education for farmers,” he added.

Ecuador relies heavily on the export of primary industry products like petroleum, shrimps, banan
a, and coffee. The two countries are discussing the signing of a Strategic Economic Cooperation Agreement (SECA).