Expansion of agricultural innovations among Korea, China, and Japan 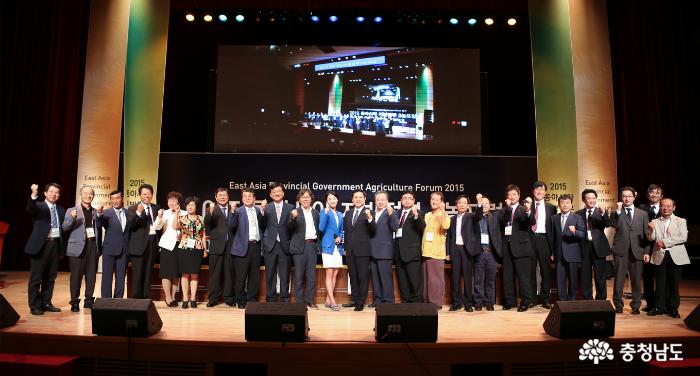 ▲ The East Asia Provincial Government Agriculture Forum 2015(use of materials)

Innovations in the three areas of agriculture, agricultural community, and farmers, which have been promoted in earnest under the stewardship of Governor An Heejung, were adopted as an agenda item after the East Asia Provincial Government Agriculture Forum in September 2015. Such is leading to the expanded exchange in the agricultural sector including reciprocal visits and sharing of exemplary cases among three countries (Korea, China, and Japan). This year, the three countries are discussing joint projects as part of the stepped-up efforts for tripartite collaboration in agriculture.

According to the Chungcheongnam-do Provincial Government, the Shanghai Municipal Agriculture Commission  (SMAC) recently contacted it for its plan to dispatch a group of officials to benchmark what Chungcheongnam-do achieved successfully in urban leisure farming and homestay in rural areas.

The 10-member SMAC delegation led by Mr. Chen Yiyun  will pay a visit to Chungcheongnam-do and have an inspection tour of exemplary locations starting May 26.
The Sichuan Provincial Department of Agriculture has also contacted the Chungcheongnam-do Provincial Government to discuss the possibility of working together in environment-friendly agriculture and ICT-based smart farm projects.

A delegation led by Deputy Director-General Zhu Jun  of said department plans to pay a visit to Chungcheongnam-do in August or September to discuss ways of working together for the development of new agricultural/dairy species and advanced breeding skills.

The two sides are expected to be able to work together in the cultivation and mechanized production of vegetables, fruits, and horticultural crops, R&D for new products, operation of bases for cattle/poultry breeding and production of pollution-free marine products, growing of organic vegetables, etc.

The three countries felt that there were limits as to what they could do to settle agricultural issues purely based on market-related factors like competition or economic efficiency. This year, they came to see the need for changes with neighboring countries to overcome the prevalent difficulty. This is the background of the current surge of agricultural exchanges among them.

Especially the East Asia Provincial Government Agriculture Forum 2015 provided local governments of the three countries operating a similar agricultural system with an opportunity to consider seriously the need to work together to settle agriculture-related issues.

In March this year, an international seminar on the invigoration of Community Supported Agriculture (CSA) for rural-urban coexistence was held among those from the three countries. Attendees cited the importance of invigoration of exchanges between urban and rural areas with focus on local food and considered various exemplary cases from the three countries to discuss how to improve the relevant political matters.

Commenting on the planned forum, Director-General  Jeong Song  of the Agriculture Bureau expressed hope that the three countries will expand the mutual cooperation by maximizing the advantages associated with their geographical proximity and similarity of their agricultural system.